Daniel started working backstage in the West End at the age of 15 and gained his degree in Visual and Performing Arts in 1987 from the University of Brighton. Since then he has worked extensively as an actor. His stage work includes: the UK tour of Beyond Reasonable Doubt, Giorgio Joyce in Simples of the Moon at the Lyric, and Dr Harry Trench opposite Lisa Harrow in Widowers' Houses. Film and TV credits include: In the Secret State, The Bill, Sherlock Holmes, London's Burning, What's the Capital of Madagascar and Trip.

Daniel has directed many productions on the London and Brighton Fringe, and over 20 full scale student productions. As a director his most recent work includes Lose the Plot a site specific production on Brighton's Volks Railway for the 2008 Brighton Children's Festival for Arts Agenda. He was an associate producer of Tandem Theatre, whose critically acclaimed productions include Danny and the Deep Blue Sea, PVT Wars and The Games Rule, which have been performed in London, Edinburgh and on tour.

A seasoned workshop leader, Daniel has coached performers in both the private and corporate sectors, as well as lecturing in Performing Arts at Eastbourne College of Art and Technology, The Swedish Folk High School, City College Brighton and Hove (Head of Performing Arts and Media) and The Academy of Creative Training (Head of Acting).

Daniel is a Member of British Equity and The Institute for Learning, is an Arts Award Advisor and holds a current enhanced DBS certificate.


The story of Father Damien de Veuster, the leper priest of Moloka'i and patron saint of outcasts. In this passionate, one man show, actor Daniel Finlay channels the powerful stories of the challenges that Damien experienced while serving the community of exiled lepers on a remote Hawaiian island in the 1870's and 80's, until his own life was taken by the affliction on April 15, 1889. Father Damien was canonised in a ceremony at the Vatican on October 11, 2009.

Damien is one of Fringe 2016's hidden treasures: a 40-year-old script, a masterful solo performance, and a story that's both shocking and inspirational. It tells the real-life tale of Father Damien de Veuster, a Catholic priest and now a saint who lived in a community of leprosy sufferers on a remote island in Hawaii. Cruelly exiled by their government, the lepers of Molokai endured a lawless and impoverished existence, cut off even from the comforts of religious faith. Cut off, that is, until a young Flemish priest named Damien came along.

Daniel Finlay's tour-de-force performance spans the full range of human emotion. We see Father Damien consumed by impetuous enthusiasm, as he establishes his mission on the island; enduring quiet moments of doubt, when he finds himself falling short of his own spiritual ideals; and angry - at one point, terrifyingly angry - when he encounters the crimes and heartlessness of others. Finlay has the knack of making you believe in imagined scenes; one particularly charming passage, he addresses a group of children, speaking to each one so convincingly and specifically that you'd swear they were actually there. Throughout it all, however, his Damien retains a diffident, slightly stumbling persona, lending the 80-minute monologue the natural feel of a friendly late-night chat.

The script, similarly, covers a lot of ground, yet remains eminently approachable. It soon becomes clear that Damien is speaking from the afterlife - yet his body is making an important journey back in the earthly world. Building on that clever combination, playwright Aldyth Morris charts a clear but intricate course through history, visiting both Damien's years in Hawaii and the formative events of his younger life. At every stage of the story, there are subtle unanswered questions - helping to ensure that this detailed biography never feels predictable or stale.

Janette Eddisford's set and design contribute hugely to the texture of the play. A host of evocative detail greets us as we walk in: from the incense burning in the corner, though the coffin-like chest draped in a Belgian tricolour, to the little yellow flags pinned to the ceiling (a modest but crucial symbol, whose significance will only later be revealed). The lighting, too, is striking at times, with beams cut through the incense-rich air invoking Father Damien's personal communion with God.

Damien is a meaty, thoughtful play, which confronts the casual cruelty of well-meaning officialdom and poses thornier questions around the life-long impact of religious belief. In Finlay's hands, however, this complex and detailed monologue never feels effortful to follow. If there's justice in the world, this production will have a long life after the Fringe; but see it now if you possibly can.

Fringe Guru - This review of a show at the Brighton Fringe 2016 was published on Friday 13 May. 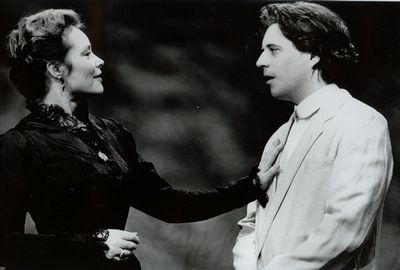 "I come from a theatrical background, which in hindsight I now realise as an educator, was a marvellous gift, allowing me first hand experience of a broad range of theatre and acting at the highest levels as well as access to the practitioners and makers of that theatre." 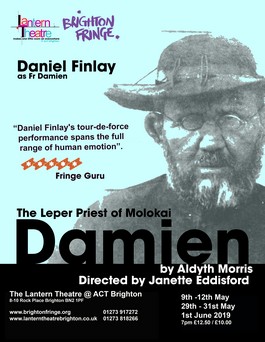