The story of Father Damien de Veuster, the leper priest of Molokai and patron saint of outcasts.

In this passionate, one man show, actor Daniel Finlay channels the powerful stories of the challenges that Damien experienced while serving the community of exiled lepers on a remote Hawaiian island in the 1870's and 80's, until his own life was taken by the affliction on April 15, 1889.

Canonized on 11 October 2009, Fr Damien is the prototype of the "Celebrity Saint". Whatever their religious convictions a Celebrity Saint is someone whose moral heroism makes them a media sensation and fires the imagination of the world.

In his lifetime Damien became internationally famous, the focus of huge press attention as well as the subject of books and the recipient of awards. Even today he holds a large appeal; he was voted the 'Greatest Belgian' of all time in a national poll in 2005 and on the occasion of Damien's canonization, President Barack Obama stated, "In our own time, as millions around the world suffer from disease, especially the pandemic of HIV/AIDS, we should draw on the example of Father Damien's resolve in answering the urgent call to heal and care for the sick."

Damien's life was not without controversy, he had an ambivalent attitude to authority and was the subject of both scandal and criticism.

Performed by Daniel Finlay, who's Godfather Terence Knapp first created the role of Damien in 1976.

Damien is one of Fringe 2016's hidden treasures: a 40-year-old script, a masterful solo performance, and a story that's both shocking and inspirational. It tells the real-life tale of Father Damien de Veuster, a Catholic priest - and now a saint -who lived in a community of leprosy sufferers on a remote island in Hawaii. Cruelly exiled by their government, the lepers of Molokai endured a lawless and impoverished existence, cut off even from the comforts of religious faith. Cut off, that is, until a young Flemish priest named Damien came along.
Daniel Finlay's tour-de-force performance spans the full range of human emotion".

"An outstanding piece of theatre that radiates quality from the moment you step into the room. Daniel holds us from the minute he walks from the darkness on to the stage. His voice is melodic, his performance natural and effortless as he ranges from laughter to fury; strong and fearless in defence of his charges, vulnerable and tender in his own self-doubt".

The Lantern Theatre has seen many shows there in recent years, but never has such a heartfelt and inspiring one man show taken place. Damien is another top 5 highlight for this year's Brighton Fringe and is extremely highly recommended to be seen". 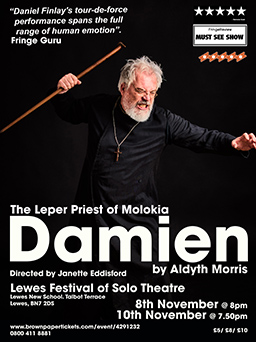